Another holiday, another example of a #shabbyoperator. In this case it is car hire company @Europcar and their franchisee – @interrent_ES, operating out of Palma airport on the beautiful island of Majorca. It’s the usual story of picking up a hire car and needing to run round it with a fine tooth comb and I confess I missed this mark. 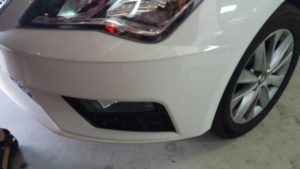 Now, I don’t know about you, but that doesn’t look too much like damage to me. I’m insured so it won’t end up costing me but to hear the agent tell me that it is around 350 Euro to repair makes me fume. If only I’d seen the Telegraph article before booking this car I’d have been very wary.

Investigating further and it appears that it is corporate culture that drives this behaviour from agents on the ground. With a Europcar insider revealing that agents are being rewarded for identifying damage as one measure for team effectiveness, a far cry from the ‘we’re not interested in anything under 5 cm’ you are told when picking a car up.

The Competitions and Markets Authority carried out a review of the UK car rental sector in 2014 – published in 2015 and it seems there is no progress despite assurances from the Big Six that they would improve their post return practices. Below is a quote from the CMA report linked above:

‘We have concerns that, where damage matrices are used, it may not necessarily be transparent to the consumer on what basis they have been charged and how the amount has been quantified. This could enable car hire companies to recover excessive repair charges unless the matrices represent a genuine pre-estimate of the loss to the rental company, for example in circumstances where separate, minor damage to a part is caused by two different consumers (who are both charged for the damage) but the part is only repaired once.’

Question is: ‘Do you trust your car hire company to be honest with you?’

My answer, as far as Europcar is concerned, is a big, fat ‘No’.

A lot has been posted over the years about quality management and the benefits to you and I, the consumer. How can it be in the 21st century consumers are faced with appalling service and service suppliers who reach for Terms and Conditions rather than investigate and resolve quality failings?

Two current battles ongoing are with @lastminute_com and @wizzair. Two travel industry companies destined to miserable failure because they have lost sight of the travellers they serve. Questionable business practices and a complete lack of empathy characterise these two #shabbyoperators.

This site uses Akismet to reduce spam. Learn how your comment data is processed.